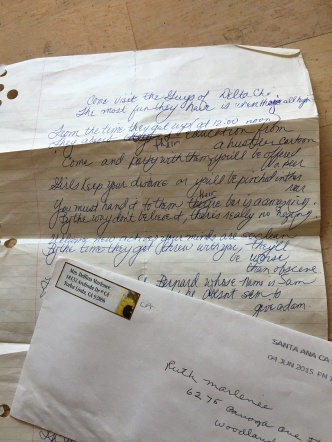 A writer posted this morning she didn’t write poetry. Hopefully, at the very least, she reads it.

A few years ago as I was working on my novel “Curse of the Ninth” (coming soon! WiDo Publishing) I was taking a class with Liz Gonzales “Writing as a Witness to Life” when she suggested I take a poetry class to help me. “Poetry Noir” – perfect, my novel is noirish — was being offered at the time by Suzanne Lummis. I signed up.

During the first class, my first poetry class ever, Lummis asked us to name poets we were familiar with.

“Shakespeare,” I answered, already sensing I was in the wrong class.

“Listen sister,” she might have responded. “There’ve been a lot of poets since old Bill.”

My mind was blank. Sure I’d read plenty of poets and since I was 13, I’d even written some bad, sad rhymey stuff. I wondered if there was still time to get my money back, still time to take the beginner poetry class.

Years after Lummis’ class and even with a couple of published poems under my belt, I’m still mostly a fan of the art, but I prefer fiction novel writing for which I earned a writers’ certificate from UCLA. And then shortly after receiving my certificate, my mother sent me a poem I’d written as a freshman in college.  How/why she still had it I have no idea other than she kept everything, every note, letter, story, post card, report card, etc. (was she my biggest fan?) So now I had proof I’d written poetry. Holding the yellowed, 3-holed piece of paper with my Catholic school-girl penmanship conjured a memory of the evening I performed my first reading on stage at a banquet held at the Fullerton Holiday Inn before a room full of Delta Chi frat boys during their initiation ceremony.

As a little sister, a GDI (god dammed independent) to the frat house, I dressed in a flowery, purple kimono over a long, lavender jersey maxi dress, I wore my hair up with a couple of plastic ivory chopsticks pierced through a pun (hey, it was a style). During dessert, I took to the stage to read my opus – really more of a roast of the misogynistic frat house. I was nervous but thanks to some smuggled-in pink André Cold Duck and the low lighting, I couldn’t focus on my audience, consisting of at least 100 frat boys, girlfriends, sorority sisters, pledges and their parents. Standing up there, I felt like the frat’s whistleblower. I got a load of laughs, like you might during a hazing.

After the reading, a young, shy frat boy named Kevin Costner walked up to me. “That was so good!” He just kept gazing at me like I was some sort of star – like I was Madonna, like he was a bigger fan than my mother. Had I known how big a star he’d go on to be, I’d have been even more honored.

As yesteryear slips by, I know what my writing has done for me and my hope is that it will inspire others. I’d like to think my frat poem was what inspired Kevin to take the stage that next year when he took up acting. I’d like to think I had something to do with “Field of Dreams” or “Dances With Wolves.” Oh, it’s so nice perchance to dream, to create, to write stories — whether to rhyme or not, that is the question.  (I can hear Lummis now. This could be a poem!)