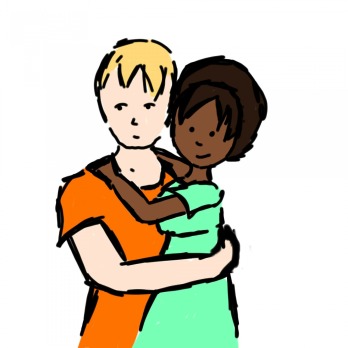 I woke up this morning thinking that finally it might be cool to be bi-racial. I mean, what a fairytale to be able to marry a prince (just a wee bit of  sarcasm)! But then I wondered if I was using the term correctly. You see, I’m half white, half Mexican and lately it seems that the term is being used in reference to half whites, half blacks. So I googled it and read the definition: bi·ra·cialˌbīˈrāSH(ə)l/ adjective: bi-racial 1. concerning or containing members of two racial groups. And then just beneath the definition were pictures of Meghan Markel and her fiancée Prince Harry. And under her picture was the question: “Is Meghan Markel black? No she’s bi-racial.”

“What are you?” I was asked growing up. “I’m half Mexican, half white,” I’d respond demurely. “But you can pass for white.” Whew! It was as if I’d made it through to the other side – to the magic kingdom — but then I’d have to leave my mom and sisters and all of my cousins at the gate. I was conflicted. I wanted to go into the castle to find my prince. (OMG! I’m having a flashback. My white grandma has brought us to Disneyland, but we’re only able to ride the Monorail around the perimeter. I’m sad as I look down into the park wishing I could go in. Why hadn’t she taken us in? Was she too embarrassed to be seen with us?)

People like to put a name on things. For example, you walk into the doctor’s office to get a diagnosis for some elusive illness, but first you need to fill out that form that asks: Are you Caucasian, Black, Latin, Asian, or what? Growing up, mom always had us fill out “Caucasian.” “But Mamacita, I—” (Ironic, because later she’d make a big deal if I acted too white.) It would have been nice to have a box for “Bi-Racial” and had I known about the term, I would have added it to the box “Other.” Like other bi-racial people, I struggled with my identity. And now there’s a diagnoses for that, too. “Racial Imposter Syndrome.” There it is in a brown-colored nutshell! I am a Bi-Racial suffering from Racial Imposter Syndrome. It’s so much better when you can put on name on things, right? Then, at least you can know what you’re dealing with. It’s like there’s a reason your stomach hurts, you have an ulcer the size of a golf ball — you have Racial Imposter Syndrome.

And tomorrow I’ll talk about how finally it’s cool to be part of the “Me Too” generation. I’ll start by googling the term to get a better understanding of what it was I experienced working in law and politics. Again, it’s so much better when you can put a name on things, right?